A 16J Errington for Yeomans for Perry. 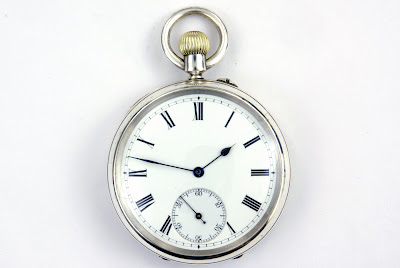 It would appear that Samuel Yeomans could sell more watches than he could make. A quality mid sized Coventry maker Yeomans was also the first Chairman of the Coventry Watch Movement Company. This is the second watch I have had that he bought in and sold on. The first was an 1896 watch by the Lancashire Watch Company and sold on to Tustain of Leamington as explained in my post Lancashire Watch Co for Yeomans for Tustain. 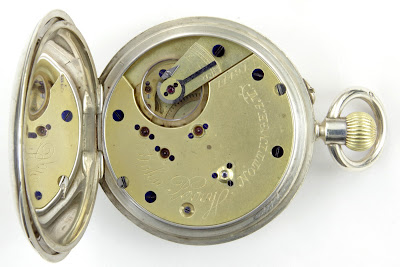 This watch has a 16 jewel movement by C.H. Errington of Coventry but the case has London hallmarks for Sterling Silver, 1894 and the mark of Samuel Yeomans. The case has the same serial number as the movement so the two belong together and is not a marriage. The movement is signed by John Perry of Nottingham, the dial would also have been signed but that transfer print has long since gone.
Posted by John Lashbrook at 10:31:00 No comments: