A Rare Rotherham and a bit about hairspings & balances.

This is at first sight a normal high end size 12 Rotherham with 19 jewels but two things make it unusual, first is still has an original watch paper in the back as described in my last post, but more important is the very rare balance assembly.

Normally these movements have a cut compensating balance with a normal steel Breguet hairspring, however in the late 1890's a new alloy known as "Elenvar" was devised by Charles Édouard Guillaume (who got the 1920 Nobel prize for physics for the development), its key property was that unlike steel its flexibility (modulus of elasticity) did not change with temperature. When used as a hairspring it removed the need for a compensating balance.

Most companies implemented the Elenvar hairspring with a screwed balance which allowed the balance to be balanced fairly quickly (as a car wheel with a new tyre) and the weight and number of screws could be used to adjust the moment of inertia to match the hairspring to make the watch run too time.
﻿﻿
With this movement Rotherham tried a different route and used a traditional 3 armed solid balance which is probably gold. Balancing and tuning was done by removing slight amounts of material from the balance as can be seen from the picture to the right..

This is the only watch I have seen with this arrangement and it is likely that Rotherham only made a few, probably because the amount of skilled work required to set up the balance would more than likely have made it more expensive than the normally sprung cut compensating balance.

Email ThisBlogThis!Share to TwitterShare to FacebookShare to Pinterest
Labels: FAQ, Items for Anorak's or Buyers, Rotherham

A rare pair of papers.

It is very rare these days to find watches with watch papers intact (they are collectable in their own right), I had only 2 or 3 from the last 600 watches. And today two turned up together, I knew one was coming but the second was a nice surprise.

The papers were used for advertising and would have been put in by sellers or repairers and occasionally you find a watch with a stack of them but usually they are glued together, to the case and / or are falling to pieces. Both of these are original to the watch and have the same retailers names as are shown on the watch faces.
The blue one is on a Rotherham from 1901 retailed by Hoefler of Devonport. The watch itself is something rather special - watch this space!

The red paper is on a Waltham 1908-610 half hunter sold by Harral of Barnsley, it has the serial number of the movement on it and is dated 11 years after the watch was made so presumably they were warranting a repair or they had bought back the watch and had resold it.
Posted by John Lashbrook at 17:08:00 No comments:

I recently had a query on dating these movements so have posted the answer here so I'll not have to do it again. 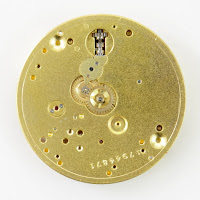 The serial number on these movements are under the dial as show to the right. My dating is based on a reasonable number of watches, listed below, in hallmarked silver or gold movements. The sample is heavily biased to watches retailed by J.W. Benson, largely because other retailers frequently used Swiss hallmarked silver cases which do not carry a date mark. Benson appear to have switched from Revue to Tavannes in about 1932 the database is only good for the 1930s.

It must be remembered that a movement might not go straight into a case which itself may have been on the shelf for a while so there will be some overlap, also the hallmarking years of the various assay houses are not in line with each other or the with calendar but the difference is small and the date is likely to be accurate to plus or minus a year.  (updated Feb 2017)