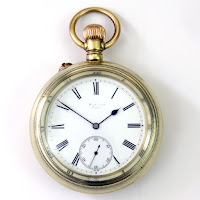 This is a rare watch for more than one reason. Firstly it was almost certainly used in the 2nd Boer War (Oct 1899 – May 1902) by an officer (or very well-to-do NCO or ranker) of the 1st Battalion of the 46th ([East?] Belfast) regiment of Yeomanry.

The Yeomanry were a successor to the Militia of Napoleonic times and were exempt from overseas service, during the Boer War volunteers for service overseas were formed into companies named for their parent regiments in the newly formed Imperial Yeomanry. The 46th Company forming part of the 13th Battalion before transferring to the 12th in 1902. 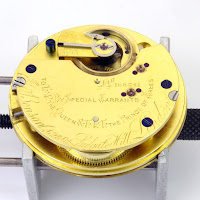 Secondly it is a rare 19 jewel version of Benson’s 15J high grade “Field” watch and probably a predecessor to what became known as the “Travellers” watch. It is in an oversized case which necessitated an oversized dial which is probably why the dial has the Benson name transfer printed. For more information on the "Field" movements see my previous blog post "J.W. Benson "Field", "Ludgate" and "Bank of England" watches".

The half chronometer (that is, it is adjusted for temperature) pin set movement has an English lever escapement with a Breguet sprung, cut compensating balance and Geneva stop work to control mainspring pressure.

The oversized screw backed case is in Brass or an alloy of high brass content and is 2.3" / 5.8cm in diameter excluding the pendant etc.
Posted by John Lashbrook at 23:48:00 No comments:

This post is intended to give an overview of the development of these three keyless movements sold by Benson and how they relate to each other, whilst Benson sold a number of variants of the three and several other English watches which are named in my Benson catalogue (The “Travellers”, “Heirloom” and the “Superlative” being three such and may be the subject of a later post) these were the only ones I have seen to have the name engraved on the top plate.
Only major changes will be highlighted here, more detailed analysis is probably going to follow for each of the three main types and for some spin off designed, some of very high quality.

Benson between the Wars.

It has been suggested that Benson did not in fact make any watches after bombing in the Great War just selling Swiss made watches, this is not the case, the 1930s catalogue specifically states that some of their “London” made watches were made in their own factory and there are contemporary written sources which confirms the factory was making movements in 1935[i] so the Benson factory survived the first war bombing to be wiped out by the second in 1941. There is more on this in may blog post J.W. Benson inter war period manufacturing
By the late 1930s Benson was one of the few English “Volume” makers still working, Rotherham having ceased production in the mid 1930’s, Williamson in c1932, Ehrhardt had stopped making in the mid 1920s, the LWC back in 1910 and the Coventry Watch Movement Company probably did not make any ebauché or movements after c1915[ii] which would have put a lot of the remaining small makers in Coventry out of business.

Update Feb 2017: Two recent finds and subsequent analysis have enabled me to further tie down the relationship between Benson & Guye, explained in my post J.W. Benson and P & A Guye two London watchmakers, later effectively one?

A few years ago there was a flood of good English movements into the market caused I think by the then very high price of gold, I was frequently buying in job lots of 6 or 8 watches for not very much money and many were fully working, ripped out of their cases by dealers wanting a quick buck for the scrap gold but in doing so destroying a lot of high quality watches which, if the cases were in the correct number of pieces, were certainly worth more than the scrap value – although they would not have been telling those they were buying from that! This piece of research is largely based on these movements and a few more recently obtained at rather higher prices. This causes a bit of a problem as without a case it is difficult to date the movements.
However for the purposes of this overview there is one saving grace, Benson were very keep to press their Royal connections so it is generally possible to quickly place a movement to one of three periods:

As a start point I have, or have had, three examples of the “Keyless Ludgate” dated by hallmarks to 1890/91, these have close serial numbers which would indicate that the date is reliable – unfortunately Benson used multiple serial number series so it does not do much else. I have not seen any keyless movements with significantly lower serial numbers. Also the “Keyless Ludgate” movement is not mentioned in a full page advert dating from 1885 on the then newly introduced Key Set “Ludgate” so I think it is reasonable to assume that the “Keyless Ludgate” came in sometime between 1886 and 1890, was still in production (under another name – see below) in the late 1930s and probably did not stop production until the start of WWII or the bombing of the factory in 1941 intervened.
A comparison between early examples of the “Field” & “Ludgate” movements show that they are essentially the same with the “Field” having 15 jewels rather than 13, a Breguet hairspring instead of an over-sprung balance, a diamond end stone and probably closer adjustment to rate and temperature, certainly later “Field” models are described as “half chronometers” meaning in this context adjusted for temperature[iii]. Both have true English lever escapements with “spiked” escape wheel and use Bensons patented wide dust ring and were clearly made in house. ﻿﻿
﻿
[Update Jan 2017] My recent discovery of a Benson "FIELD" made by CH Errington of Coventry to a completely different design rather complicates the issue, these Errington movements were probably bought in to cover a surge in demand. Also earlier adverts show that the Field and Bank keyless watches were around c 1890.

Over the years the Field and then the Ludgate got smaller dust rings and some years after the key set Ludgate was dropped the “Keyless Ludgate” became the “Ludgate”.

The setting mechanism is an important factor in identifying the maker of a movement and time period or sequence in which it was made, with the in-house Benson it is a little complicated.

·         Early models of the “Ludgate” were rocking bar, then they changed to the same system as the “Field”, then back to rocking bar.


·         The “Field” initially had a unique system than moved to the early “Ludgate” type rocking bar, this was before the “Ludgate” had returned to this system.