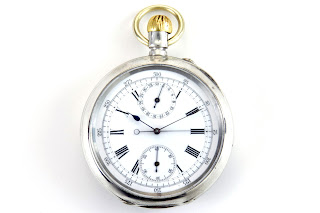 Unlike most English Chronographs (aka Doctors Watches) of the period, this Swiss made watch for J.W. Benson does not completely stop when the centre seconds hand is stopped and so is far more practical (and expensive!).

It has a Swiss Lever escapement with a Breguet sprung cut compensating balance and 15 jewels.

The gilding on the top plate was most probably done in England after the watch was engraved, I don't recall previously seeing Benson giving their address as "London & Switzerland" on watches of this period, I suspect the engraver was not used to doing it either as the "Switzerland" bit looks to be squeezed in. 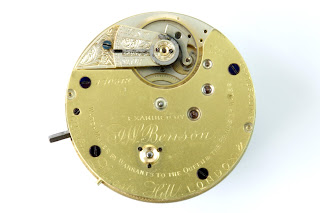 This one was advertised by a dealer as being c1880 but it is somewhat later than that. The Swiss hallmarks for .935 silver were in use from 1882 through 1934, but more revealing is the engraving on the movement "By warrant to the Queen and the Prince of Wales". Victoria died in 1901 and Benson immediately changed their engravings to read "The Late Queen" so it is no later than 1901.

All of the datable Benson movements I have seen mentioning the PoW have been from the late 1890s so I am fairly confident that this one dates from 1898 give or take a year or two. 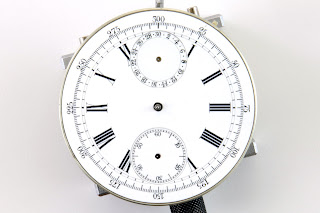 The watch has the normal hour and minute hands with a lower subsidiary dial for seconds.

The upper subsidiary dial is for the stop watch function and records minutes from 0 to 30. In fact it keeps going beyond that so any length of time can be measured, but you need to remember how many "thirties" there have been.

To make it easier to read the hand steps each minute rather than moving gradually as would the minute hand on most mechanical watches and the central minute hand of this watch.


The "normal" watch is crown wound and pin set as were many English watches of the period and Swiss watches made for the English market.

The Stop Watch function acts as many watches might today, from stopped & zeroed the first press on the crown starts the centre seconds hand and the upper subsidiary minute counter.

The next press stops the two and a third press moves both back to zero.

By some definitions a "fly back" chronograph should "fly back" and automatically restart, however this is the more common version.

All of the extra gearing, cams etc. needed to run the stopwatch function creates a lot of drag on the movement and may result in poorer timekeeping and will certainly reduce the run time of the watch (although it would start again if the stop watch function was stopped), it is best therefore to only activate the centre seconds hand if it is needed.