A rare and interesting Stauffer


Apart from being pin set, at first glance this could mistaken for an Omega - I wonder who copied who? But it has a trade mark on it that shows it is by Stauffer of Switzerland. 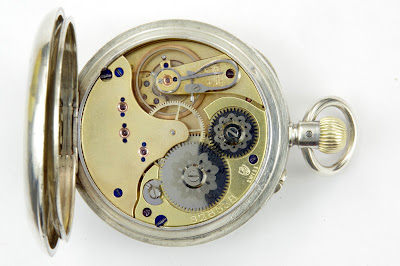 and when the dial is off it is quite different. 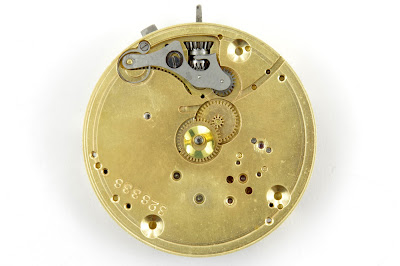 The trade mark was registered in 1880 but had been in use from about 1835, it consists of two "S"'s and a very small "c" in a shield, not the later and far more common 3 triangles etc.

A feature I have not seen before is the way the Banking is adjusted, by far the most sensitive and precise I have seen but you do need to take the balance off to make an adjustment to the one on the inside: 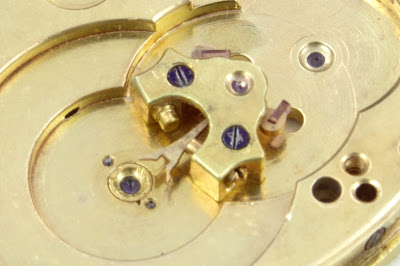 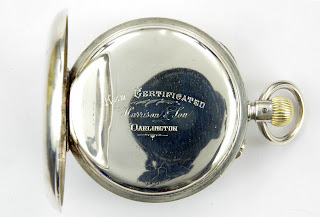 and "Harrison and Son, Darlington.

Kew (Later the National Physical Laboratory) was the standards agency for watches and clocks, was responsible for certifying chronometers and ran what was effectively a competition for top quality watches. Although certainly not a chronometer this is a good quality watch from around 1900.
﻿﻿
Harrison was one of a widespread watch and clock making family in the North East of England, they are most probably descendants of the Harrison of the Longitude prize who came from the area. It is very difficult to work out family relationships from the clockmaking records as there were a lot of them about in the 19th century and they kept moving about.

The last record I can find of Harrison in Darlington is 1905 but they might have continued for sometime after and not been recorded in Loomes or elsewhere.

This is a very unusual watch! It is London finished almost certainly from a Prescott ebauché, a Coventry Watch Movement Co ebauché is a slight possibility as they opened in 1889 using a Prescott ebauché as a starting point, but those that I have seen have been rather different. I suspect but can't prove it was finished by quality maker Nicole, Nielson & Co who are known to have supplied Benson.


﻿ The unusual thing is that the Keyless Ludgate of the period, and I have had examples from the previous year and several from later years, are completely different being made in-house and incorporating Benson's patented dust ring construction also used on "The Field" watch and others. Further the engraving on this watch is identical to the "normal" version including having the Patent number believed to be for the dust ring that continued to be used for some years after this watch was made.
﻿ It can only be assumed that Benson were short of Keyless Ludgate watches and so bought some in but it must have been confusing for customers to see such different watches being sold under the same model name.

More information on the Ludgate can be found in my post Benson "Field", "Ludgate" and "Bank of England" watches. or by selecting "Benson" from the list of tags below right.