The range of size 16 movements by Revue Thommen appears to be very large, but all it not quite as it seems.

These movement look fairly different, in fact apart from materials (and the gilt ones were also made with the nickel finish and vice-versa) they are essentially the same. Shown are some hunter and open faced versions but all variants were available as either.

The winding / setting mechanism, barrel, gear train and lever pallet are exactly the same (for watches made at about the same time) and for setting can have, without modification, a long winding stem as shown in the two centre examples or a short one for cases with a captive crown and stem. The balance assembly on all of these movements may be either  over-sprung or Breguet with either a cut compensating balance or a screwed balance (with Elenvar spring). The number of jewels can be varied and a micro adjusted used instead of the standard index for further variation.

The top plates and cocks are clearly different but the main body of the movement is the same except for being drilled differently to take the two studs and between 1 and 4 screws used to locate and secure each cock and plate.

Email ThisBlogThis!Share to TwitterShare to FacebookShare to Pinterest
Labels: Items for Anorak's or Buyers, Revue, Swiss 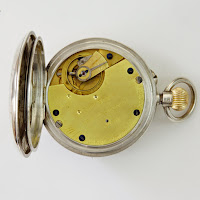 Whilst some excellent silver watches are about, the supply of good mid range watches from eBay continues to decline and at the same time Fellows appear to have discontinued their quarterly specialist pocket watch auction with pocket watches being sold in their general watch auctions.

For the first time I can remember mid range Walthams are becoming hard to get hold of and, perhaps due to the declining scrap value of silver, silver cased watches are generally outnumbering those in good rolled and filled gold.

Due to my enforced shut downs in December, February and March, stock levels are currently good with some nice English watches available (pictured is a nice  "Bank" watch by J.W. Benson, 1920) and with more silver watches and half hunters than I have had for a long time, but my back log of Swiss and American watches is lower than it has been for several years which does not look good for the winter when I would normally be doing 20% - 30% more watches than during the summer.
Posted by John Lashbrook at 16:38:00 No comments:

One in an occasional series on common watch faults.

﻿
This is a fairly common fault, particularly after the watch has been disturbed when serviced, usually it comes to light immediately or during the initial test but is can develop after a few months of use.

The watch runs and the second hand moves but the hour and minute hand do not move at all  (a severe and obvious case!) or pinion slips, and the hands stop occasionally or move slowly giving the impression that the movement is loosing time badly, possibly in a random fashion.
﻿﻿

The minute hand is mounted on the cannon pinion which also drives the under dial motion gear that moves the hour hand.

The cannon pinion is friction mounted on the central shaft of the watch, this has to be firm enough to turn the hands but has to be loose enough that it will slip when the hands are adjusted either by the key or, in a keyless design, when the setting mechanism turns the motion gear.

The pinion can start slipping if one or more of the following happens:
It is thought that setting the watch by turning the hands backwards can cause a cannon pinion to start slipping so only make small adjustments backwards and do so slowly and only if you know that the particular watch will not be damaged in other ways by turning backwards as many complicated watches such as repeaters can be.

How it is fixed:


Usually 2 or more actions are required in addition to degreasing the parts:

A hint for Chronograph Owners. 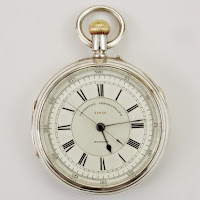 The arrival of this Chronograph now restored reminded me that some chronograph users are abusing their watches. DO NOT leave the watch for extended periods wound but stopped with the "top" button as this will prematurely age the mainspring.

Stopping it before carrying in luggage or sending it through the post is however probably a good idea as it may help protect the balance.

The Coventry made size 22 movement has 13 jewels and Geneva Gear and is an early one from 1879. The Case is by WG Hammond of Coventry.
Posted by John Lashbrook at 17:43:00 No comments: