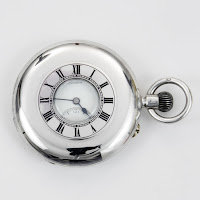 No not about railroad watches as such but about the frequency at which a watch balance turns. By the middle of the 19th century lever watches were pretty much standardised at 16,200 vibrations per hour (VPH). As watches got smaller and engineering tolerances got tighter makers started to move towards a faster beat of 18,000 VPH, usually referred to as a "Quick Train".

As usual the Americans moved first with Waltham changing the beat of their size 18 full plate 1877 model to 18,000 after launching it at 16,200 and the Illinois Watch Company changed quickly in about 1879. 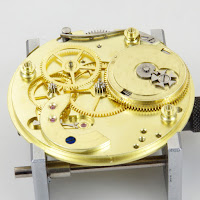 The conservative English trade were, as usual, quite a way behind probably not helped by the investment required in redesigning their watches to change the gearing in the train and retooling costs which would have been more significant for the much smaller English companies than for the large American operations. 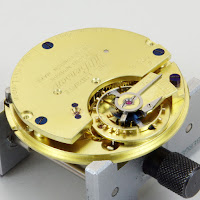 Generally it was the early 1890's before the Coventry and Lancashire trades started to use the faster train, led not unnaturally by newly introduced keyless three-quarter plate designs with some of the older full plate designs being allowed to die a natural death, particular Fusee movements,  and others being changed mid life or when Swiss Lever escapements started to replace the English Lever.

The London trade were even more conservative with some makers, notably P & A Guye and J.W. Benson persisting with the slower train up until around about the first World War. The lovely Benson Ludgate pictured was made in 1912 still running at 16,200 which does give it a very nice "majestic" tick.

Wrist watches, as one might expect, continued the development and my 1980s Rolex runs at 19,800 VPH with later ones running even faster.
Posted by John Lashbrook at 10:26:00 No comments:

Email ThisBlogThis!Share to TwitterShare to FacebookShare to Pinterest
Labels: Benson, Items for Anorak's or Buyers

As described in some detail in my post "the standard watch case" buyers could at some retail outlets configure their own watch by selecting a case, movement, dial etc. and then to have the watch assembled for them on the premises

The Waltham display cases as shown here could be used to display a selection of movements to help the customer decide. I suspect the hole in the base was used to bolt it down to stop people making off with a potentially valuable movement.

Now this type of case can be used to simply display the movement or to use it as a desk watch.

A Double Own Label!

At first sight this appeared to be a normal "own label" watch made for by C.H. Errington of Coventry for Curtis & Horespool of Leicester.

However looking at the hallmarks there are normal marks for Chester 1895 but one set of makers marks have been over-stamped by another.

Under high magnification and with a hint from another mark (see below) it is possible to read the second set of marks as belonging to Alfred Moss Jacobs & Co (Watch Makers), 18 Cross St, Hatton Garden, London.

The original marks are probably those of Errington.