A stake in watchmaking (and jewellery) is a form of anvil used with a punch for riveting and other operations, simple ones are held in a vice and the punch, which is hand held, is hit with a hammer or pressed down by hand. Whilst a number of things can be done this way it was literally rather hit and miss on delicate jobs, especially when the stake, work (usually in 2 pieces) and punch has to be perfectly aligned.


To make things easier a device known as a “Staking Tool” was developed, this included a mount for the stake and an accurately machined tube for the punch aligned above it.

A hammer or the hand are still generally used to perform the required operation but more precise positioning is possible.
These are still made and with a comprehensive set of punches retails for between about £200 (Indian made) and £800 (Swiss made).
A refinement of the standard Staking tool, which appears not to be available on modern staking tools but is on Jewel setting tools, added a lever arrangement to force the punch or other tool down, this made it much more controllable and easier for operations such as jewelling, work on balance assemblies, etc..
The major limitation was the lack of a device to limit the movement when pressure is applied so that it was very easy to push things too hard and too deep, so the next development was the Jewel Setting (or Jewelling) Tool which does, with the right accessories, some of the things the “Staking Tool” can do but which includes lever actuation and a micrometre measuring and limiting device and usually made with more precise tolerances generally.

It is claimed that work with the modern Seitz tool can be done to within 0.005mm, the down side is that it is smaller both in the diameter of the punches and more importantly in the depth of the hole drilled into some punches and stakes which is not big or long enough to take some pocket watch components so, for instance,  it is not possible to use a jewel setting tool to rivet a centre wheel back on to the centre arbour of a pocket watch if it has been loosened by a breaking mainspring (Watches without a Safety Pinion often have the wheel weakly riveted on so that this fails to prevent damage further down the train).
The Bergeon / Seitz set I have just purchase cost over £1k, it might not pay for itself in cash terms compared to just having my previous tools, but it should make delicate operations rather less stressful and will allow me to do jobs such as Lanterning Cannon Pinions (nipping them in to prevent slipping) more accurately and to reduce hour hand holes to fit which was not possible before. And of course to reset or replace jewels with a greater chance of success.

It will hopefully also reduce accidents, cursing and swearing somewhat.
Posted by John Lashbrook at 23:39:00 No comments:

Thoughts on the failure of the Lancashire Watch Company

The Lancashire Watch Company failed in 1906 (although it continued trading in administration until 1910), many have blamed the failure of the skilled workers (many of who would have had to sell or wind up their small business after the formation of the LWC) to embrace new ways of working, Cutmore [1] argues that given early success this in unlikely and that poor marketing, bad forecasting, unwanted products and a plethora of designs & products and by implication pricing were to blame. Looking at the trade catalogues from 1898 [2]  and later I would go with the later point.
The three-quarter plate keyless watch is a good example:

In 1898 the three-quarter plate keyless was available in two forms, both were pin set with the crown connected to the movement through bevel gears in the case and on the movement.

﻿
﻿﻿﻿﻿﻿
#104: a swing out movement with the hinge integrated with the face plate and a catch opposite to secure it in the case. This model is rare and I have never one complete with its case.
#116: what became the more familiar type retained in the case by two screws with the addition of a locating pin to stop the movement turning in the case through the action of the bevel winding gear. This was not yet the “Standard” watch case.
Read more »
Posted by John Lashbrook at 10:26:00 No comments: 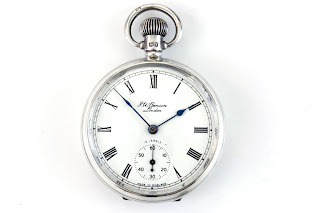 
This is a good quality movement for Benson by Smiths of Cheltenham who made limited quantities of good quality lever movement wrist and pocket watches on the back of their instrument and clock making business - particularly that of the long established aircraft instruments division and not to be confused with the Welsh joint venture that made millions of cheap pin lever watches from 1947. 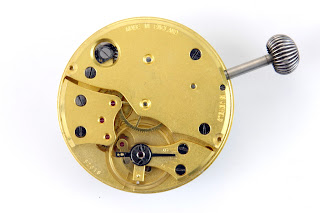 [1] Being in beat means that the balance action is symmetrical swinging an equal distance in each direction and that the balance staff, impulse jewel and pallet arbour are in perfect alignment. If you think in terms of a long case clock the "tick" equals the "tock" and it has a steady rhythm.