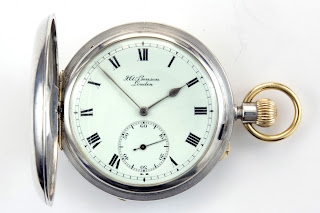 This is the first intact English made hunter I have come across by Benson, it is a later version of  "The Field" watch and was the most expensive of their three "volume" made watches. Other complete "Field", "Keyless Ludgate" and "Bank" watches that I have seen have been open faced or half hunters and most have been in size 12 rather than this size 16.

The "Half Chronometer" (Adjusted) slow train movement has an English Lever escapement with a Breguet sprung cut compensating balance and 15 jewels including a diamond end-stone for the balance. Geneva stop gear was used to control mainspring pressure and thereby improve isochronism. 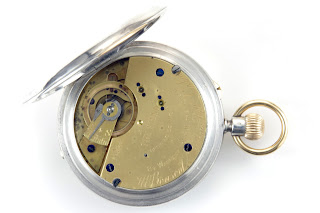 The inscription "By Warrant to the Queen" is rather confusing, I have only seen this with respect to
Queen Victoria (from 1901 to c1907 "to the Late Queen" was used) but this movement is in a case hallmarked for Benson in 1920 and it clearly belongs with the movement as the serial numbers are the same, which in itself is rare with an English Benson.

As far as I am aware Queen Mary never issued a warrant to Benson and they certainly did not claim one on any of the dozens of watches I have seen from the 1920s and 30s or in the sales catalogue I have from the 1930's which does claim warrants for the emperor of Japan and several European monarchs.

﻿ The probability is therefore that the movement was re-cased by the makers in 1920 and the movement was made prior to 1901 which would also mean that this new style "Field" watch overlapped the old style
Posted by John Lashbrook at 10:02:00