The watch is from the Errington Watch Factory in Coventry (then owned by Williamson) for David Harley of Dunfermline but the case was much modified before being presented to William Russell by The Carnegie Hero Fund for saving life in 1912. 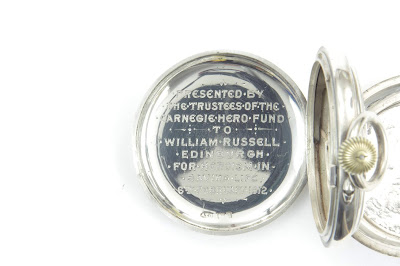 The hallmarks are interesting:
The case was originally made by Thomas Clark and Alfred Ward of Kensington Rd Coventry ("C&W"), who I know from other examples were making cases for Errington watches at this time, the Errington ("C.H.E") mark having been cancelled in 1905. So the Dust cover is almost certainly original to the body.

As was common the pendant was made by a specialist pendant maker, in this case by Charles Harrold & Co.

The back is more complicated. It is not in one orriginal piece the centre having been cut out and a cast silver disk with the Latin moto and a hero's laurel wreath expertly let into it. This removed the hallmarks, including the London Assay mark, but as the back was now modified and from two makers it could not be resubmitted for assay and could not have had 2 sets of marks. It is OK for two lids to have different marks because they are hinged to the body and are considered different pieces of silver - which is why they are individually marked in the first place.

The history of the front lid is more problematic, the "ATO" mark is that of Albert Oliver of Clerkenwell, London. I can think of two reasons it is different to the rest, either the original was damaged during the engraving and had to be replaced or, my guess, the watch was original a half hunter and was converted to a hunter so that the long engraving could be put in a visible place. 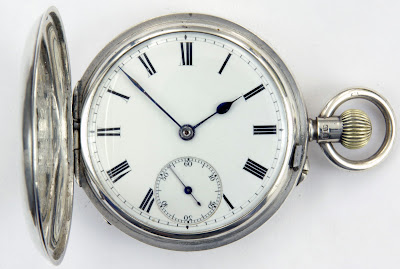 
The two watches above both have the classic 19J three-quarter plate pin set movement by Rotherham, one in size 12 the other size 16. Both are from 1910 and coincidentally I acquired them on the same day from different sellers. One interesting point is the difference in serial numbers.

The reason is that Rotherhams used multiple serial number ranges, I don't know how many but at least the two shown by these examples, one for size 0 and 6[i] , at least one for earlies models and probably more. This makes it difficult to determine the companies total production which Cutmore[i] estimates at about 600,000 in total over 50 years. It can also make dating watches in filled gold cases tricky if the movement is an unusual size.

Email ThisBlogThis!Share to TwitterShare to FacebookShare to Pinterest
Labels: Rotherham

R.R. Fogel of New York had an agreement to sell Waltham watches into South American markets, the special order movements were styled  "Cronometro" and came from various Waltham product lines and grades.  The 1899 model "Victoria" is a 15 jewel movement similar to the -620. The movements were often recorded in production records simply as "Export" and could be in mixed runs so it is not known how many were made. But they are rare in UK. 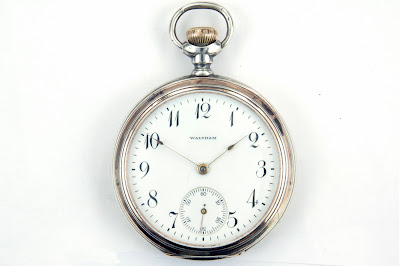 I have only seen a couple -618's, the open faced version above and the Hunter below. It is essentially a 15 jewelled version of the Traveler. The 1908 equivalent appears to be the "Marquis" which is more common.

The watch movement sizing used in the UK & US was devised in Lancashire - the Swiss used "Ligne" but by the 1930s made most of them to fit "Lancashire" sized cases. Most US makers stuck to the even numbered sizes 12, 14, 16 etc.
The Lancashire Watch Company however made watches in several quirky sizes,this one is a size 14 ¾ but with the heavy case it ends up with the same externam diameter as most size 16s.

Email ThisBlogThis!Share to TwitterShare to FacebookShare to Pinterest
Labels: Items for Anorak's or Buyers, LWC

An unusual jewel configuration on a 17J Recta. 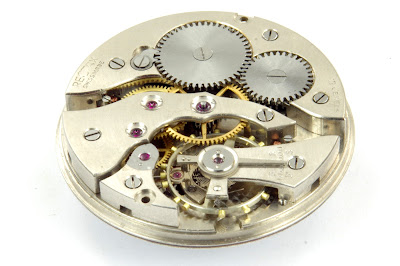 This 17 jewel Recta for J.W. Benson  has an interesting configuration in that the centre wheel does not have a jewel on the face side and the jewel count is made up to 17 with a single cap jewel on the escape.

English makers, particularly Rotherham, Errington and Coventry makers using CWM Co ebauchés did something similar either making 16 jewel movements or adding one centre wheel jewel to their 19J movements probably under presure from Marketing department to have a jewel visible on the centre wheel.


The designers did not want a jewel at the face plate as with the centre wheel only turning once per hour the benefit is small and with the power from the barrel being applied close to the face plate there is a percieved risk of damage.